Brilliant and Comfortable, for Everyone Viewing

LED's work by using a pin-head sized piece of material to produce a tiny amount of light and then narrowly focusing it forward.  This results in over-bright conditions (often uncomfortable and distracting) when viewed directly head-on, and inadequate brightness (difficult to see and drowned out by sunlight) when viewed at angles other than head-on.

SunBright EM® displays have uniform, constant brightness at all viewing angles.  And because they are getting their optical brightness from the sun and ambient light, they are inherently self-adjusting to all brightness conditions--from direct sunlight to overcast.  They're always comfortably bright, and at all angles--not "get out your sun glasses" distracting at some angles and "what does it say?" at other angles.

You'll notice that LED scoreboard displays are almost always photographed head-on (directly in front).  This is where the LED is the brightest, but the brightness falls off as you view at increasing angles to the side.  In scoreboard applications, especially in portables which are viewed closer, only a small number of people view the unit head-on, and the majority of people are viewing the unit at angles, which is where LED displays are at their worst.  You almost never see LED Scoreboards photographed at angles, where the majority of the audience is viewing.  (When you do find a picture of an LED scoreboard at an angle, it is usually photoshopped to enhance the display brightness to a fake level)  We found a couple real (non-fake) angle pictures of LED scoreboards on the web (displayed below)--you can judge for yourself.

SunBright EM® displays use large rectangular line segments that make the numbers much easier to read than a small number of tiny points of light trying to simulate a wide line.  The physics and optics of the human eye allow for number visibility of 40 feet per inch tall of display height, meaning that a 4" tall display has a visibility of 160 feet for average vision, but this applies only to displays with fully formed characters, like a doctors' eye chart.  The crude approximation of characters by using a few points of light (LEDs) makes displays that are much more difficult to read, especially at a distance, and 40 feet per inch visibility with LED displays is simply not possible.

Some people think that LED's last forever.  This is simply not true.  All LEDs will significantly fade in brightness over time, and the industry standard specification is "Down to 50% brightness in 50,000 hours, when operated at room temperature (68F)".  The brightness degradation gets much faster if the LED is operated at above room temperature, which is common with LED's in enclosures, like scoreboards.  LEDs are NOT LIFETIME displays.  To see this, look at an LED display in an elevator that has been in service a number of years--you'll notice that the segments that are used the most (like floor #1) are much dimmer than the lesser-used segments in the display.

SunBright EM® displays produce constant brightness over their lifetime.  The only change over time is a slight fading of the yellow color towards white, which is still very visible against the black background.  The mechanisms that move the segments to be visible to the audience or away from the audience have cycle lives in the millions of cycles, and it is not possible in any normal scoreboard application to wear one out.  If you manage to become the first person to wear out a SunBright EM® display in a scoreboard application, we will repair or replace it for free, regardless of age.

No, the displays aren't colored green (but we could make them colored green if you wanted).  They are "Green" environmentally.  SunBright EM® displays electromagnetic technology uses NO power (zero, nada, zip) when they are displaying a static (constant) number, and they take only a tiny amount of energy to change the display when a change is needed.  Compare this to LEDs, which consume power at all times to display a number.  You can see the effect of the nearly-zero power consumption of the SunBright® displays in our scoreboard battery life specifications, which are the highest by far in the industry.  (500 hours of running time on a set of AA batteries on the baseball model)

SunBright EM® displays have only one disadvantage to LEDs--cost.  Electromagnetic display technology is more expensive to make than LEDs.  LEDs are made by the millions in China, India, Pakistan, and Singapore (there no US producers of LEDs for scoreboards), verses SunBright® EM displays being made by the thousands in the United States.  The goal at ScoreTronics is to build the BEST scoreboard, even it it has to cost a little more.  Our thousands of customers, without exception, feel that it's money well spent.

PICTURES OF LED SCOREBOARDS VIEWED AT ANGLES (NOT HEAD-ON)

The pictures below were found on the web, and are un-retouched except to remove the brand names.  You can see that the left picture was taken in partial sunlight (not full sunlight)--you can tell this from the shadows--the shadows would be darker if it was in full sunlight.  The right picture was taken in the daytime (you can see the sky reflecting off the front panel), but not in full sun.  Both are taken from a real life viewing angle--in other words, not head-on.  Notice that when LED scoreboards are viewed at angles (not head-on), they loose their contrast and visibility.  (notice that the "1" in the clock on the left picture is barely bright enough and you can't really read the period display on the right picture--we think it is a "9", and the right digit of the clock "7" is hard to read).  If these units were viewed at these angles in full daytime sunlight, they would be quite difficult to read.  It's an inherent issue with outdoor LED displays, but not with EM displays.  EM displays stay the same brightness no matter what the viewing angle. 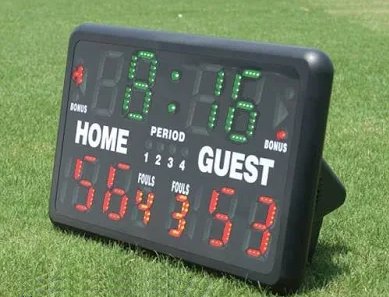